Some thoughts on a remarkable statement from the bench by a Sheriff, seemingly blaming denominational schools for sectarianism.

What can be done where a Sheriff is alleged to have fallen short of the standards of independence and impartiality or where “political” comments have been made?

Have any Sheriffs ever been removed for their political views or statements?

All these questions and more will be answered  below.

As befits a sheriff whose background was as litigation partner in one of Glasgow’s most prestigious firms, he has been able to deploy an excellent legal mind in dealing with the myriad of different cases, civil and criminal, which make up the workload of a sheriff in Scotland in the 21st century.

From speaking with sheriffs over the years, one common theme is that, from time to time, even the best sheriff might say something which makes perfect sense in his head, and even in the courtroom. However if the comment is repeated in the media, then all of a sudden a storm can be whipped up quicker than a North Sea squall.

Sheriff Davidson might be sensing the barometer dropping, the wind picking up and the rain starting to fall this weekend. 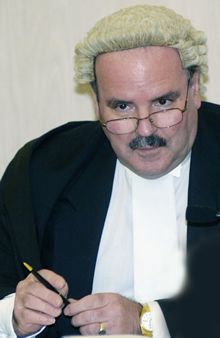 The Dundee Courier reported yesterday on a case which proceeded last week at Dundee Sheriff Court.

As an aside, and perhaps a reflection of this being an East Coast paper, the headline was “Dundee Sheriff criticises anti-sectarian legislation”. As you will read, if this had been a West of Scotland case, I suspect that the headline would have focussed on a different remark by Sheriff Davidson!

The Courier’s report reads, in part:-

Prosecutors had alleged that on December 26, at Dens Park, McLeish engaged in behaviour which was likely or would be likely to incite public disorder in that he sang a song contrary to the offensive behaviour at football and threatening communications (Scotland) Act 2012 Section 1 (1).

However, Sheriff Davidson blasted the legislation, saying: “I’ve been attending football matches since 1957 and there is nothing I’ve seen in this particular case that would cause me the slightest concern.”

“If they can prescribe a list of songs which people are banned from singing, they will find the courts are full and the football grounds are empty.”

He told McLeish … : “There is absolutely no evidence whatsoever as far as I’m concerned that your behaviour would be liable to incite public disorder and you will be found not guilty.”

The decision of the Sheriff is itself worthy of further consideration, on the basis that it was alleged that Mr McLeish was singing “Roll of Honour”, a song remembering the Irish Republican hunger strikers who dies in the Maze prison in 1981. I would like to come back to that issue in another post.

However the quote I’m focussing on is this:-

Few would disagree with the first part of Sheriff Davidson’s sentiments. However the second part might be rather more controversial.

The article quoted a spokeswoman for the Roman Catholic Diocese of Dunkeld who said: “The sheriff’s comments are deeply regrettable. Catholic schools exist throughout the world without being accused of leading to sectarianism.”

The Diocese of Dunkeld

There have already been voices raised in criticism of the Sheriff, although interestingly I have read some opinions which have called for him to be sacked, not for his comments on schools, but for having had the temerity to clear Mr McLeish and thus, in the minds of some, to have given succour to “supporters of terrorism”!

I should say, for the avoidance of any doubt, that whilst Sheriff Davidson might not have been wise to make the statement he did, I would not think that he should be liable to any sanction for having done so.

It might however prove to be the first serious test of the new judicial complaints procedure set up following the passing of the Judiciary and Courts (Scotland) Act 2008.

Before the passing of that Act there was a tortuous process which had to be gone through before a sheriff could be removed. This involved investigation by the Lord President and Lord Justice Clerk and a motion being passed by Parliament. There were in fact only two sheriffs to whom that sanction had been applied over many years.

In the early 1990’s Sheriff Ewen Stewart was dismissed as a result of various complaints about his performance on the bench.

Before that, in 1977, Sheriff Peter Thomson was removed as a result of his political involvement. At that time the issue of Scottish independence was very much a live one. Sheriff Thomson, prior to his appointment to the bench, had been a founding member of the Plebiscite Society, campaigning for a vote on Scottish independence.

That involvement continued until 1977, even although, in 1974, following complaints about his participation in the Society at that stage, he had been warned that he could be compromising his judicial role.

In 1977 he had been involved in sending out plebiscite papers in Rutherglen, which formed part of his Sheriffdom, and on which he was marked as “Returning Officer”. This was despite the fact that, until not long before, the sheriffs had been the Returning Officers for elections.

Sheriff Thomson was seen to have compromised his position by his political involvement, even though not actively campaigning for one verdict or another. The House of Commons approved his dismissal.

In December 1977 Denis Canavan MP secured a debate on withdrawing that approval. The debate can be read here. As an historical document it is noteworthy seeing how many weel-kent MPs took part in what might have seemed a “little local difficulty”.

As well as Mr Canavan, there was participation by Nicholas Fairbairn, Malcolm Rifkind, Secretary of State for Scotland Bruce Millan, Norman Tebbit (whose unsuccessful intervention prompted a remark by “Hon. Members” which Hansard records as “The Hon. Member should get back to his aircraft”), Jo Grimond, former Secretary of State for Scotland Willie Ross, Winnie Ewing, Teddy Taylor and Dr Jeremy Bray.

One of the main points raised in that debate was the independence of the judiciary. A mere 31 years later the 2008 Act was passed. Amongst its main provisions is Section 1 which imposes on the Scottish Government the continued obligation to uphold “judicial independence”.

Section 40 of the Act lays down the process by which a tribunal appointed by the First Minister would consider if a sheriff was unfit to hold office.

The question of the judge’s “conduct” is key.

Turning to the Statement of Principles for Judicial Ethics, published in 2010  by the Scottish Judiciary, we find the following, at paragraph 4.6:-

Many aspects of the administration of justice and the functioning of the judiciary are the subject of public consideration and debate in a range of contexts. Appropriate judicial contribution to this consideration and debate may be desirable. It may contribute to the public understanding of the administration of justice and to public confidence in the judiciary. However, care should be exercised to ensure that such contribution remains within proper bounds. In this connection, it should be borne in mind that a judge should avoid involvement in political controversy, unless the controversy itself directly affects the operation of the courts, the independence of the judiciary, or the administration of justice. It should also be appreciated that the place at which, or the occasion on which a judge speaks may cause the public to associate the judge with a particular organisation, interest group, or cause, which is to be avoided.

A judge should be aware of, and understand, diversity in society and differences arising from various sources, including, but not limited to, race, colour, gender, religion, national origin, caste, disability, age, marital status, sexual orientation, social or economic status and other like matters. The judge should not, by words or conduct, manifest any bias or prejudice towards any person or group on such grounds.

“… recusal would be necessary where a well- informed and fair-minded observer would consider that there was a real possibility of bias: Porter V Magill [2002] 2 A.C. 357.”

Sheriff Davidson’s comment does  not, as far as I am concerned, breach any of the principles of Judicial Ethics. However I think that there could be cases where his comment, well-intentioned though it undoubtedly was, could lead to him having to recuse himself from dealing with a particular matter. It would NOT be the case that he should withdraw from any cases involving Catholic schools for example, although one could envisage a case, civil or criminal, involving denominational schools where his statement would render it inappropriate for him to preside.

I hope, for the sake of Sheriff Davidson, and for the people of Dundee whom he serves, that there will be no formal investigation into this matter. One slip of the tongue should not jeopardise a distinguished judicial career.

I would suspect however that the reporters from the Dundee Courier who attend Sheriff Davidson’s court in future might find that his asides from the bench are in future reduced to the absolute minimum!