Rangers International Football Club PLC is, as the name tells us, a public limited company. Its shares are traded on the Stock Exchange. There are certain standards of corporate governance which require to be met in the interests of shareholders and potential shareholders. These include having a suitably qualified Board of Directors, comprising executives and non-executives and including a chairman to represent the interests of the investors and to oversee the executives.

RIFC presently has a board which consists of:-

And that is all. 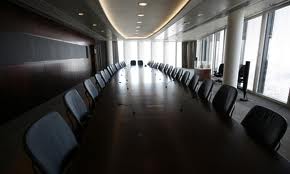 A board meeting of RIFC in full session

There is no Chairman.

There is no CEO.

The AGM has had to be postponed.

The company’s NOMAD has publicly forced RIFC to “correct” statements by Mr Mather and Mr King.

So why has Mr Mather gone, and gone now?

“Mr Mather has agreed to stand down in an attempt to help calm speculation over the governance and executive management of Rangers.”

That is a bit like the statement attributed to a US Army Major in the Vietnam War:-

‘It became necessary to destroy the town to save it’!

Or, because of concerns about how the ship is being sailed, the captain has jumped overboard!

Has Mr Mather left because of any failing on his part? What has he said? (Link courtesy of the official Rangers website)

“The interests of the Club are of paramount importance and I believe these are best served by me leaving the Club.

“Despite recent events and speculation, the facts of the matter are that the Club is financially secure and in a far better place than it was a year ago.

“Unlike most football clubs Rangers has money in the bank, no borrowings and this season we have assembled a squad which is capable of progressing through the leagues.

“I leave with my head held high and will remain as a shareholder and a supporter of Ally and his team.

So, in his time, both at Murray Park and as CEO, Rangers have achieved a status which can only be the subject of praise.

It is reminiscent of the departures of Mr Green and Mr Ahmad, who both departed having been cleared of involvement with Mr Whyte.

And to cap it all, as a result of the bungling by the Board, led by Mr Mather, the AGM at which there would be a chance to get the company back on an even keel, has had to be postponed!

There have been persistent rumours that the AIM has been looking at the corporate governance of RIFC PLC. There has been no formal confirmation of this and therefore such allegations must be taken as mischief-making. However, even in the best run company, the present situation would at least give some pause for thought, if not cause for concern.