Who Is the Busiest Person Connected to the Rangers Saga?

There is a large cast of characters, anyone of whom could fit the above description.

You have, of course, the Board, fighting to repel the Rebels.

There are the Rebels/Requisitioners/Petitioners (or whatever title they happen to have depending on precisely what they are doing).

There are then the spin doctors – led by Media House and the undoubted king of “Public Relations and Strategic Communications” in Scotland – Jack Irvine.

There is the person who prepares the various announcements which pop up, thick and fast, on the Stock Exchange website as formal notices from RIFC PLC.

There is the person who supplies the pies to

No, that is unworthy. Please ignore that line.

There are then the opposing ranks of Rangers-supporting bloggers and webhosts, each offering their own views on the situation, and clearly now divided into two irreconcilable camps.

There are the “disinterested” although very “interested” outside observers, in which group I think I should be numbered.

There are the professional writers, reporters and journalists, all seeking to catch the next scoop ahead of the competition.

But, there is one person who seems to be engaged in a 24/7 shift – working away at all hours of the day and night and diligently performing their vital task, never being seen – although the effects of what they do are apparent for all to notice.

I mean, of course, Craig Whyte!

Gotcha! No I do not mean Craig Whyte – just wanted to see if you were awake!

Instead the accolade goes to an unnamed individual (I like to think it is one person and not a team) employed by Field Fisher Waterhouse. FFW is a firm of solicitors based in London and which has an excellent reputation as big hitters and especially within the sports law area.

What does this person do?

It seems that their job is to scour the internet, by day and by night, looking for things which ought not to be published.

Anyone who follows the Charlotte Fakes Twitter feed, for example, will be used to seeing links to documents posted by Charlotte, and, on clicking on them finding that they have vanished into the ether – often with only the legend “Removed due to a copyright claim by Field Fisher Waterhouse” remaining to mark where the document once was.

People who use the Scribd website to post publications allegedly connected with the saga, and those who go there to read them, are also very familiar with the link being a dead one.

In addition, as well as this almost instant removal service, there has been comment recently about (a) Rangers-supporting bloggers (who are thought to be opposed to the present Board) being on the receiving end of legal correspondence asking them to cease and desist from making certain comments/allegations and (b) some Rangers-supporting bloggers removing posts which are critical of the present Rangers Board, without any acknowledgement on the particular site that this has even happened.

Regular visitors to Mr Leggat’s blog, which, it is fair to say, is rarely dull, will have noticed a couple of recent blogposts vanishing. Of course, in the 21st century, cached copies of removed posts are still to be found, and even for the assiduous FFW worker, it must take a little longer to persuade Google to remove something from its cache.

Of course, when a post is removed, then someone with an enquiring mind might wonder what in it caused it to be removed and on what grounds. What part, for example, of a post alleging that the Easdale brothers intend to bring Charles Green back to Rangers at some enormous salary so offended Rangers or FFW that it had to be removed? Was it the mere suggestion of such a development?

(I should make clear that I am not suggesting that there is any truth in such an allegation – indeed the swift removal suggests that that, or at least some part of the article within which that statement was made, was at least inaccurate. Mr Leggat, who has often in the past proclaimed his willingness to stand by his writings in court, if threatened with legal action for defamation, seems to have removed that post, together with another recent one, without demur. That suggests he has accepted that his suggestions were, at least on these occasions, ill-founded.)

So it must be said that the person, probably ensconced in their office in FFW in London, surrounded by Big Mac wrappers and half-empty cups of coffee, has done a fantastic job so far.

I imagine that this person goes by the name of Bill Fremp. (5 non-existent points to the first person who knows where that name comes from – no Googling now!)

(For the avoidance of doubt, there is no such person as “Bill Fremp” employed by FFW and no resemblance between him and any person living or dead should be inferred.)

All this of course will have to be paid for, although I am sure that a suitable and fair hourly rate has been agreed between the lawyers and its clients – after all, being able to charge a client for a 24/7 service sounds like Nirvana for fee-conscious lawyers.

So maybe, just to ensure the health and well-being of Bill Fremp, as he sits slumped in front of the PC screen in his London office, probably at this very minute, should we all agree to say nothing at all about Rangers for a couple of days, and thus give him a chance to get to bed, even for a few hours? 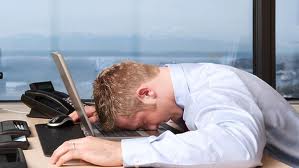 It is all taking a toll on Bill Fremp

Or rather is it the case that this remarkable story will continue to produce more and more news, argument and discussion as every day goes past, meaning that such a self-imposed moratorium is doomed to fail?

Please, for the sake of Bill Fremp’s sanity, let it lie for a few hours!

391 responses to “Who Is the Busiest Person Connected to the Rangers Saga?”