Official confirmation came this week, firstly from the Court of Session case list and then from Rangers itself that Mr Ahmad had initiated court proceedings for damages against his former employer.

Rangers fans are now aware of a Court of Session action brought by the Club’s former Commercial Director Imran Ahmad and in response has released the following:

“Mr Ahmad’s lawyers have lodged his summons at the Court of Session. This is simply a procedural step which the Club anticipated. The Club’s lawyers are of the view that his claim is unfounded in fact and in law and is likely to fail.

“They have advised the court that the claim will be defended robustly. Mr Ahmad’s claim is for £500,000 in alleged unpaid bonuses and not the sum previously claimed in his pre action correspondence which was in excess of £3 million.”

What is there that can be gleaned from this so far?

First of all the statement is not in response to the action being raised, as that would have taken place some weeks ago, but to fans becoming aware of it. 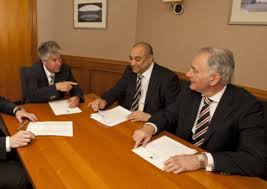 Secondly, no one ever starts a court action saying that they will lose. One might sometimes think that, if pouch comes to shove, a case will be unsuccessful, but you do not tell the world, or even just the opposition that. It is a bit like a big football match. Nobody goes into a game saying that they expect to be beaten.

Thirdly, I like the comment that the court has been told the action is to be defended robustly. There is not a separate box for the defender to complete which asks how the claim is to be defended. That could be an innovation though …

“Does the defender wish to defend this claim:-

Fourthly, does it suggest a weakness in Mr Ahmad’s case if his claim has shrink from over £3 million to “only” £500,000?

When engaging in pre-action correspondence there is, within reason, a lot of posturing. And, in any event a claim for half a million is still something to cause sleepless nights! It would suggest though that a claim based on a share of every penny raised in the share issue and as a result of contracts Mr Ahmad negotiated, whether or not that money has come in now, or in 5 years’ time, has been whittled down to something which has a chance of being upheld – one would assume specific contracts. It always seemed a stretch for the Commercial Director to be claiming a cut of the share proceeds, especially where Mr Ahmad made little or no public comment about that.

Unlike the threatened court actions by Craig Whyte/Worthington Group etc Mr Ahmad has actually set the ball rolling with his case. If it is contested “robustly” it might not end until 2015.

Finally, although one would not know it from the official announcement, guess who Mr Ahmad has sued?

His claim is not against Rangers Intergalactic International Football Club PLC. Rather it is against the Rangers Football Club Ltd – which used to be known as Sevco Scotland Ltd.

Mr Ahmad was never a Director of the PLC, although he was listed as a key employee in the IPO document.

This suggests too that the ultimate beneficiary of the contracts will be important – can Mr Ahmad claim a share of the proceeds of a contract entered into with the PLC?

The likelihood is that, after a convenient interval, as happens with most litigation, both parties will arrive at a situation where they are equally unhappy – the defender paying more than it wants to pay and the pursuer getting less than he wants!

But, would you believe it, the Rangers saga just keeps generating court actions!

Which is good if you like writing about court cases! 🙂