Yesterday I wrote about Vince Cable and his ham-fisted and flat-footed, and indeed blatantly transparent attempt to make political capital from the “foot-dragging” of the Crown Office investigation into alleged offences by bank officials.

I suggested that his involvement was a sign of someone who failed to understand (or was prepared to ignore) basic tenets of the constitution, such as the independence of the criminal justice system from direct political involvement, and the difference between the Lord Advocate and the Advocate General.

Whilst I can frankly say that many statements that have come from the Lord Advocate, Frank Mulholland QC, and from his predecessor, Elish Angiolini QC, have been very easy to disagree with, Mr Mulholland has issued a press release which I could almost have written myself!

“I am disappointed to hear that the Secretary of State for Business Innovation and Skills (BIS) has written to the Advocate General in such terms. The Advocate General has no role in the investigation or prosecution of crime in Scotland.

“It would be unfortunate if this were to be construed as attempted interference with independent investigation and prosecutorial decision making by the Law Officers.

“In the wake of widespread public concern about reported issues in the banking sector, I instructed an investigation into allegations involving the Scottish banking sector. That investigation has been led by the COPFS Serious and Organised Crime Division. The investigation is complex and ongoing and the volume of material being considered is vast.

“Crown Office officials have kept BIS officials appropriately advised of progress throughout the investigation and confirmed on several occasions that in Scotland it is the Lord Advocate who is the sole prosecuting authority and that he acts independently in the public interest.

“Public confidence in Scotland into the investigation of allegations of criminality occurring here is best maintained by thorough independent investigation by the COPFS and not communicated through the media.

“If the Secretary of State contacts me directly I would be happy to brief him on progress to date and timescales”.

Ironically the media reports which have commented on the story, and Mr Cable’s “gaffe” have themselves revealed a pretty poor understanding of the Scottish legal system.

Mr Cable tries to hide from his error, but his hat fails to do the job

The Guardian initially had its piece referring to Lord Wallace, not as the Advocate-General but as the “Advocate-director”.

The BBC managed in the same piece to refer to Mr Mulholland, as indeed he is, and by the end of the piece to “Lord Mulholland”. Never has someone been elevated to the peerage with such speed! 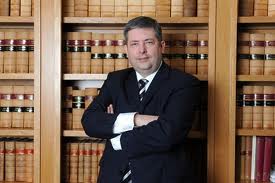 Frank Mulholland QC. The Lord Advocate who, despite what the BBC says, is not a Lord yet

Of course we are now used in Scotland to the Lord advocate not being a peer. After all, as one acerbic member of the Faculty of advocates put it to me when Mr Mulholland’s predecessor was in office – “We have a Lord Advocate who is neither a Lord nor an Advocate!”

(Mrs Angiolini, as she then was, was of course a commoner and a solicitor, as well, of course, as being a woman.)