I have written at some length about this case. You can find all of my posts about Tixway UK Ltd here.

This company was formed in 2007 whilst Mr Whyte was a disqualified Director. His now estranged wife, Kim Whyte, was therefore the sole director until she resigned to be replaced by her husband in 2008.

Craig Whyte in happier times, as winner of Bow Tie Wearer of the Year

One Stop Roofing Supplies Ltd had the misfortune to become involved with Mr Whyte through a company run by a Mr Keatings, a friend of Mr Whyte. Mr Keatings’ company needed to buy roof materials but could not get an appropriate line of credit. Mr Whyte stepped up to the plate and agreed that his company, Tixway UK Ltd, would pay for the materials used by Snowcast, Mr Keatings’ company. The business was owed over £85,000, which was a serious sum to be due.

Mr Whyte reneged on the deal and once the matter became public knowledge there were various statements made by or on behalf of Mr Whyte suggesting that there was no case, and indeed that this was only being pursued as a result of Mr Whyte’s position, almost in fact suggesting that it was a form of legalised blackmail, looking to profit form his honourable position.

Immense credit must go to the men at the helm of One Stop Roofing Supplies, Robert Jenkins and Paul Martin. Mr Martin is a lesser-known figure in the world of football than Mr Whyte, but an infinitely more honourable one. Until the end of last season, when he stepped down due to health issues, he was manager of Albion Rovers and was, along with the rest of his backroom and on-field team instrumental in Albion Rovers being promoted to, and then staying up in, SFL2.

Paul Martin – Possibly the best manager in the long history of Albion Rovers, and one of the men whose company defeated Mr Whyte

In fact, Mr Martin’s achievements at Cliftonhill now rank him probably above even Davie Provan, manager when Rovers last won promotion, in the glory season of 88-89.

However, alongside the fight to get into SFL2 and stay there, Mr Martin and Mr Jenkins fought an even tougher opponent – Mr Whyte.

He steadfastly denied liability, and ended up in a witness box at Glasgow Sheriff Court where he was found, among the more polite descriptions of the Sheriff, Nigel Ross, to be “wholly unreliable.” Mr Whyte failed to recall why he had been disqualified from being a company director for seven years. The Sheriff’s damning judgement allowed the media a lot more leeway to be critical of Mr Whyte, and the whole episode did him no favours as far as keeping Rangers afloat was concerned.

Even after the decision by the Sheriff that Tixway UK Ltd should pay One Stop £86,127.36 plus interest at 8 per cent from the raising of the action together with expenses, Mr Whyte appealed further, on what seemed, to be kind, an argument with a flimsy chance. His lawyers, Harper MacLeod, withdrew from acting for him, and the appeal was dropped.

The small world of Scottish law can be confusing for some. Harper Macleod have acted, in the past, for Celtic. They have represented the SPL. They were the solicitors for Mr Whyte’s company here, and for him personally in his Court of Session litigation with his wife.

Did Harper Macleod stop acting because Mr Whyte/Tixway stopped paying? Or was it because the appeal was unsupportable, or was it for “professional reasons”? Who knows, and neither Harper Macleod nor  Whyte will tell us.

In any event One Stop’s lawyers took their decree and have now been successful in having Lord Hodge in the Court of Session appoint a liquidator to Tixway UK Ltd.

In the last accounts Tixway UK Ltd Annual Accounts lodged by Tixway UK Ltd, the company is shown as having net assets of £2,369,046. However those accounts are up to 31 January 2010, the next accounts now being overdue, and very much so.

Will there be any of the “investments” of Tixway UK Ltd left?

It was speculated that perhaps that company was the proprietor of Castle Grant, Mr Whyte’s highland home. On past form it is possible that the assets of Tixway UK Ltd have melted away like frost on a spring morning, although I am sure that One Stop’s lawyers will have taken every step possible to freeze whatever assets they could find. 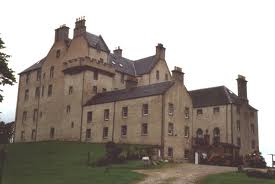 Castle Grant – Mr Whyte’s stately home, without the “Council tiles” on the roof

This is a microcosm of the Rangers disaster. Normal businesses, not glamorous ones but run by hard working people, have lost out on varying amounts of money. Duff & Phelps produced a huge creditors’ list for Rangers, which even ignoring Ticketus and HMRC ran into millions.

One Stop will have spent a lot of money pursuing Tixway UK Ltd, and I wish them the very best in getting back as much as they possibly can.

The appointment of liquidator means that the assets of Tixway UK Ltd will be realised to meet its debts. On the basis that it was never clear what that company actually did, it might seem strange that it was owed almost £1 million at 31 January 2010. I am not suggesting that the debtors figure has been inflated. There is no evidence of that. However, Vital UK Ltd, the company whose failure led to Mr Whyte’s disqualification before, suffered from the very same problem, with over £650,000 of debtors only amounting to £100,000 recoverable.

One intriguing possibility is that Mr Whyte could be summoned back to court, and this time to the Court of Session, to be “publicly examined”. Under s133 of the Insolvency Act 1986:- “Where a company is being wound up by the court … the liquidator may at any time before the dissolution of the company apply to the court for the public examination of any person who—(a)is or has been an officer of the company”.

The liquidator must make such an application if asked to do so by “one-half, in value, of the company’s creditors”. On such an application being made the court would fix a date for the hearing. At the hearing the person so ordered to appear “shall attend on that day and be publicly examined as to the promotion, formation or management of the company or as to the conduct of its business and affairs, or his conduct or dealings in relation to the company.”

If it turns out that the assets of Tixway UK Ltd have been dissipated, then I suspect that such an application will be made regarding Mr Whyte.

Section 124 of the Act deserves to be presented in full.

“(1)If a person without reasonable excuse fails at any time to attend his public examination under section 133, he is guilty of a contempt of court and liable to be punished accordingly.

(2)In a case where a person without reasonable excuse fails at any time to attend his examination under section 133 or there are reasonable grounds for believing that a person has absconded, or is about to abscond, with a view to avoiding or delaying his examination under that section, the court may cause a warrant to be issued to a constable or prescribed officer of the court—

(a)for the arrest of that person; and

(b)for the seizure of any books, papers, records, money or goods in that person’s possession.

I have no reason to believe that Mr Whyte would fail to attend, or abscond, or attempt to do so. However, in the highly unlikely event that he did, the powers granted by S134 are dramatic. Failure to attend could lead to him not being able to return to Scotland.

If Tixway UK Ltd remains asset rich, then One Stop will get their money and Mr Whyte would probably avoid such an examination. For all the interest that an appearance by Mr Whyte would generate at the Court of Session, I hope he does not get summoned as this would suggest that the debt has been paid.

14 responses to “One Stop Roofing v Tixway UK Ltd – Craig Whyte’s Company Wound Up – A Case for His “Public Examination”?”