A Look at the Sevco Scotland Website – aka Rangers.co.uk – The Spin-Meisters Take Over

In which I have a look at the Rangers.co.uk website and see that the Barnum style season ticket promotion is in full swing, and that the website is putting across the message that all is well – steady as she goes. I also offer a few thoughts about season tickets, and what power they give, which is not what people have been claiming.

Steady as she goes!

The Power of This Blog  🙂

If I had a grand conceit, I would think that a change to the Rangers.co.uk website was due to a blog post I wrote recently. However, I am not claiming the influence to effect such a change. It is noteworthy, at least to me anyway, that the small print at the bottom of the webpages no longer mentions that the Rangers Football Club PLC is being run by the administrators, but it now says the following:-

It might have been more useful to put up a banner at the top of each page proclaiming “Under New Management – Business As Usual”. If that appears in the next few days, I will claim the credit!

The copyright notice still bears to be in the name of “Rangers Football Club 2012”. That, even if a trading name, is not the trading name of Sevco Scotland, which of course has the word “The” at the start.

It is also clear that the Rangers.co.uk website is pushing heavily the argument that Sevco = Rangers, as it was in the beginning, is now and ever shall be, Club without end.

Ironically the detail quoted above, suggesting that “The Rangers Football Club” is merely a trading name, seems to argue against the continued existence of old Rangers!

Top of the list of news stories as I look at the site today is Lee Wallace proclaiming that the old Rangers does still exist.

In the linked piece, by Andrew Dickson, there is a bit of journalistic comment before we get to the quotes. Mr Dickson writes:-

“Supporters of other teams appear to have grown increasingly eager to push the belief the Ibrox outfit is a brand new entity over the last couple of weeks in particular. That follows the failed move to take Rangers Football Club plc out of administration via a CVA and the consequent decision to liquidate it.

The reality is that while the old holding company – founded in 1899, 27 years after Rangers itself – is to be wound up, the club formed in 1872 remains. With it stays its proud history, during which it has won a world record 54 league titles and 115 major honours in all.”

“I’m still wearing a Rangers badge on my chest when I go out to train. I’m still going to be going out on a Saturday at Ibrox and nothing has changed in that respect. It’s still Rangers that I’m playing for. In that sense, they’ve absolutely not died and it’s down to all the boys who are still here to put us back where we belong.”

I like his comment that “in that sense they’ve absolutely not died”. That could be taken as implying that in some sense they had!

Mr Wallace proceeds to praise the fans, which I am sure is unrelated to the urgent need to sell them season tickets. 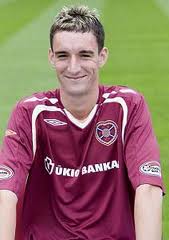 Lee Wallace wearing the strip of the team which probably won’t be paid in full for selling him.

The piece also contains an odd line, written by Mr Dickson. It states:-

“Rangers will almost certainly be relegated from the SPL for next season and moves into the First Division and Third Division have both been mooted.”

First of all, “Rangers” will not be relegated from the SPL. There is no such entity in the SPL. Secondly, that statement suggests that there is still some hope at Ibrox that there will be a “Rangers” playing in the SPL next season. Is that blind faith, or based upon anything more?

Mr Dickson has written the previous piece as well. In it Ross Perry puts forward a case for Lee McCulloch to be the new captain. One is needed because the last captain of Rangers, Steven Davis, has left, having objected to his employment transferring to the newco (whichever one it is).

If you read Rangers.co.uk however, you read that:-

“Previous skipper Steven Davis has expressed his desire to leave Ibrox having said he refuses to have his contract transferred over to the new company which now owns the club.”

Mr Davis has not expressed a desire to leave. He has gone.

The next piece does not fit the “brave new, but still old, world” approach of the website. It reports, by way of a very short statement, that the friendly fixed for 12th July against Le Havre has been called off, at the instance of the French side.

A statement reads: “Rangers Football Club have been informed by Le Havre that they no longer wish to play us as part of their 140th anniversary celebrations on Thursday July 12. Unfortunately the match will now not take place.”

Sadly the cancellation of the game means that “Rangers” will not get to play at the ground where Jean Alain Boumsong started his professional football career.

Jean Alain Boumsong, formerly of Le Havre and Rangers, whose transfers are rumoured to have been instrumental in the discovery of documents which set Rangers on course for the rocks.

A couple of days before, the website reported that the invitation to play in a pre-season tournament at Southampton had been withdrawn. The statement was brief, but to be fair, it did provide a link to the Southampton FC site. Standing the terms of the statement from Southampton, I can understand why they did not reproduce it on the official site.

The decision has not been made lightly and has been reached with the integrity of the competition in mind, ensuring that the annual event will remain an extremely competitive experience with both Arsenal and Anderlecht bringing along a first team squad.“

The next article extols the virtues of Chris Hegarty, a 19 year old, who has signed a contract with Sevco Scotland (one assumes). It also includes the line:-

“It’s time for us to step up and go and show the fans what we can do and hopefully show them value for their hard earned season ticket money.”

And to cap off the theme, the prior article has the finance director Brian Stockbridge, offering “clarity” on Season Tickets. I have added some comments in bold.

“In view that a new company has been set up to take direct debits some supporters may have been concerned that the company contacting them was different to last season.

The new company has been set up to run a football team, not to “take the direct debits”. That seems an odd phrase, almost indicative of a split between parts of the company. Fans were right to be concerned that a different company was approaching them. It was!

“This is inevitable because of the transition from the old company to the newly formed company and we regret any inconvenience caused to supporters. There is no question of any money being taken in advance of July 6. However, supporters can be rest assured that all monies from season tickets, when they start to be collected by direct debit, will be going to the Club and for sole use by the Club.

The Club will use that money, being its takings, to pay its bills. If it makes a profit, it could be used to pay dividends to the shareholder. It will also pay the salaries of the staff, and the directors, including Mr Green. The money which belongs to the Club has to be used for the Club, even though that comprises a wide range. It looks a good statement although ultimately meaningless.

“Any season ticket holder seeking additional clarification should call Supporter Services on 0871 702 1972. Once again I would re-iterate the importance of season ticket money to the Club and while this has been a difficult period for Rangers and there is uncertainty regarding league status, we would appeal to all supporters to renew their season tickets and support the Club.”

Roll up, roll up, and get your Season Tickets! Even though you don’t know if there will be a team, and if so if it will be allowed to play football next season and indeed which level of Scottish football it will be at!

The inspiration for the push for season ticket sales at Ibrox? Roll up, roll up! Welcome to the Greatest Show in the SPL, or SPL2 or SFL1 or SFL3 or…

It strikes me that there is a lot of guff spoken about season tickets, following on from the purchase of Rangers by Craig Whyte. The complaints, eventually, were loud and long about Mr Whyte using the fans’ money. How dare he! And we still see it now, with calls not to buy season tickets for Ibrox for the coming season in case the fans’ money is misused.

But that seems to miss the point. The fans are not the owners. Nor is the football entity a bank holding their payments in trust. The fans are customers. As soon as they hand over their money, as long as the seller is able to perform the contract by having football matches for the fans to see, the supporters have no “claim” on the money. A business is entitled to use the money it gets from its customers. Every business in the world survives on that. Does Tesco pledge that the sales it generates will only be used for the purposes of Tesco? It does not need to. If Tesco decide the pay its Chief Executive a bonus of £100 million, then, as long as it follows correct procedures, with shareholder, not customer, approval, it can do so, and that is spending for the company.

If the fans want a say in how the team is run, then they need to become shareholders. However, as we have seen with the obliteration of any value the 26,000 private investors in Rangers Football Club PLC had, when someone owns 85% of the company, even a 10% shareholding, as Mr King had, is of little value. That is despite his shareholding being of a level where he could have insisted on certain things happening, like the calling of a General Meeting, even where Mr Whyte refused to do so.

What we are seeing is therefore more “spin” from Sevco to attract the ticket sales essential for the business to operate.

Clarity from the Chairman

Finally in this round-up, I come to the statement by the Chairman. He mentions season tickets. He states:-

“There is no doubt, however, that any boycott of season ticket sales can only harm the Club and the manager Ally McCoist and ultimately the supporters. Such action would only serve to help destroy the very institution that is so dear to us”.

“Rangers has a loyal and extensive season ticket holder base and we would urge all fans to renew their books. In this aspect, the ownership of the Club is irrelevant. Season ticket sales are the largest single source of income for the Club and only the Club and the team will suffer if it is withheld. The money does not go to Charles Green, Malcolm Murray or any investor – it goes to Rangers.”

“The Club is funded by the new owners and working capital is in place for the foreseeable future.”

The $64,000 question is how long the funding can cover costs if season ticket sales do not pick up immediately.

33 responses to “A Look at the Sevco Scotland Website – aka Rangers.co.uk – The Spin-Meisters Take Over”